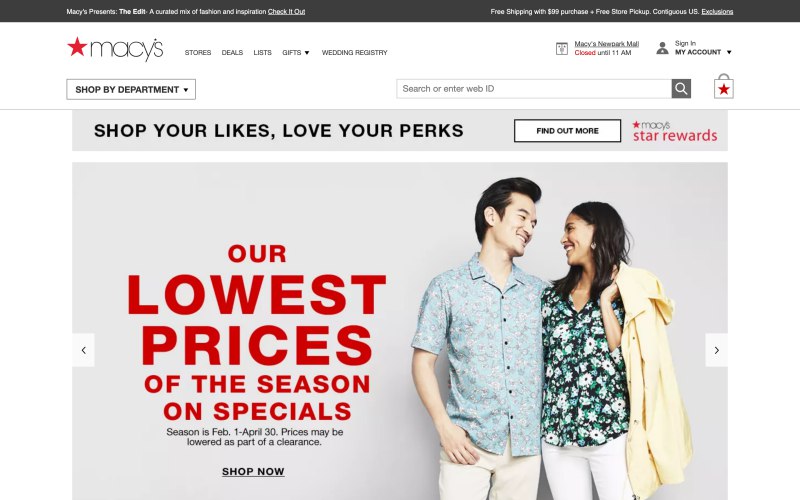 Net-a-Porter
SSENSE
Shopbop
Macy’s 2019 Review
Description
Macy’s is popular both online and offline because of their stylish collections that feature the best, the latest, and the hottest brands in the fashion world. Their large inventory includes items for everyone and every need, as they got department sections for men, women, children, furniture, watches, jewelry, bed & bath, and plus & petite. With such an impressive selection, the website is every fashionista’s style haven.
Products' Positive Reviews
Customer Service and Support
Range of Products
Shipping Options
Reader Rating1 Vote
Positives
Huge selections of pieces for everyone
Includes a subcategory for petite and plus sizes
Also offers items for the home
Negatives
There is a minimum purchase required for free shipping
There were orders that took too long to process and ship
Bad customer service
2.7
Ratings
Visit:
Macy's

When it comes to the number of offers, Macy’s is definitely among the top ranks. They include hundreds of popular brands in their collections, with pieces ranging from bags, clothes, accessories, jewelry, shoes, and sportswear, to bedding, mattresses, furniture, and pillows.

Such wide selection can be quite chaotic to organize, yet Macy’s managed to have them all “stacked” inside categories and subcategories, which makes it so much easier for shoppers. Shopper love that for every category, the website include more helpful links to make the shopping experience even more wonderful. Some of those links include the Sale & Clearance Section, The Lowest Prices of the Season, and 40-75% Off Designer Clearance. There are also many other lists that shows a variety of options for shoppers to save money, which any shopper would appreciate.

For shipping, there is a minimum purchase requirement before Macy’s offer free shipping. For their return policy on the other hand, they give a year of allowance for customers to return the item to any Macy’s brick-and-mortar store. While many enjoy shopping on the website, many also have expressed their disappointment for some orders that weren’t handled well by Macy’s. Some of the orders took a long time to process and deliver, while their customer service is often hard to get a hold of, making it more frustrating for the clients.

How to use Macy’s Promo Codes

Few stores match the easy recognition that Macy’s elicits. And that could be for a few reasons. Up until 2009, the Macy’s store on Manhattan’s Herald Square was considered to be the largest department store in the world, a title it has held onto for a few years short of a century. It also has plenty of stores across the nation. Other flagship stores are located in San Francisco, Southern California, Chicago, and Miami. Certain must-see events, such as the Macy’s Thanksgiving Day Parade, has cemented it into the hearts of many New Yorkers. The historic store in Manhattan may have lost its title, but the parade remains the largest parade in the world and is the second oldest of its kind to exist in America. But it also has among the biggest inventory there is in the United States. It would be interesting to dip a little into how the store became the giant we know now.

A Bit of History

Like many great American companies, Macy’s started out as a small company, a goods store in 1858. Originally called R.H. Macy & Co., it was named after its founder Rowland Hussey Macy, a businessman and former sailor. It was during his time as the latter where he got inspiration for the red star that’s identifiable as Macy’s, supposedly a symbol of success.

One could say that Macy and the company he founded was ahead of their time as they were credited for firsts: accomplishments that were unheard of previously. These include a one-price system, introduction of certain products (that can even be as simple and ubiquitous as colored towels), and a treatment of genders that can be considered groundbreaking at the time (the company was responsible for putting Margaret Getchell at an executive position, a first at the time). Macy’s was also the first to be given a license to sell liquor.

It took a few tries, but in 1877, the company Macy founded began its journey as the department store we know today. A few decades more, it became public and began to open more stores in adjacent states, and soon, on the West coast. Jumping a few decades ahead nearer to today, specifically in 1994, the acquisition of R.H. Macy & Co. by the Federated Department Stores, Inc. made them officially the world’s largest department store company. A few more buys of other stores took place, and shortly after, the stores dropped the initials of the Macy’s founder, and just kept his last name.

Today, Macy’s boasts of 670 locations nationwide, and maintains a website where it can also serve customers, now at the comfort of their homes.

Adapting to the Times

The red star that came to symbolize Macy’s means much more than just a logo. To this day, it remains the guiding star by which the department store operates. Each point is designated with meaning, all of which direct the company and its employees to keep clients happy and coming back for more.

Macy’s aims to give a more than satisfactory experience for its customers both online and offline by striving to be an authority in fashion, rewarding loyal customers, anticipating needs based on the time, thinking of the future which includes use of more high-end technology, and addressing previous shortcomings when it came to customer satisfaction.

No successful company ever came to its peak without experiencing some lows. Macy’s has not been spared by the problems that plagued department stores in the past years, but with the red star and history in mind, it has strived at catering better to customers.

In recent years we have seen the changes in purchasing habits, with some customers preferring to make their transactions right on their phones especially when they do not have the leisure of time. Macy’s had a dedicated team program a mobile app that’s intended to be a complementary feature to the Macy’s website and physical stores. The process is quite simple and personalized recommendations are made based on viewing history. Customers are also given the option to get their items through the store with their Buy Online Pickup feature.

Macy’s still continues its spend on other channels, but chose to dial down discounts and increase more exclusive items courtesy of its private brands to address customers’ increased spending capabilities.

A Name Known To Everyone Today

You’d be hard-pressed to find anyone who hasn’t heard of it, especially among Americans. Everyone knows Macy’s. If anyone hasn’t, they’re probably living under a rock.

And why not? It is the nation’s top and biggest retailers. Macy’s broad selection is not limited to apparel for men and women, and all ages alone. It is also your go-to department store for your accessories, cosmetics, appliances, home furnishings and more. Its reach is far and wide considering the number of stores it has per state all over the nation, as well as Guam, Washington, DC and Puerto Rico, and with corporate offices located in both Ohio and New York. Sister companies include Bloomingdale’s and Bluemercury’s, all operating under one company, Macy’s, Inc. If you are wanting a specific fashion purchase, you’d probably have luck finding it at Macy’s. 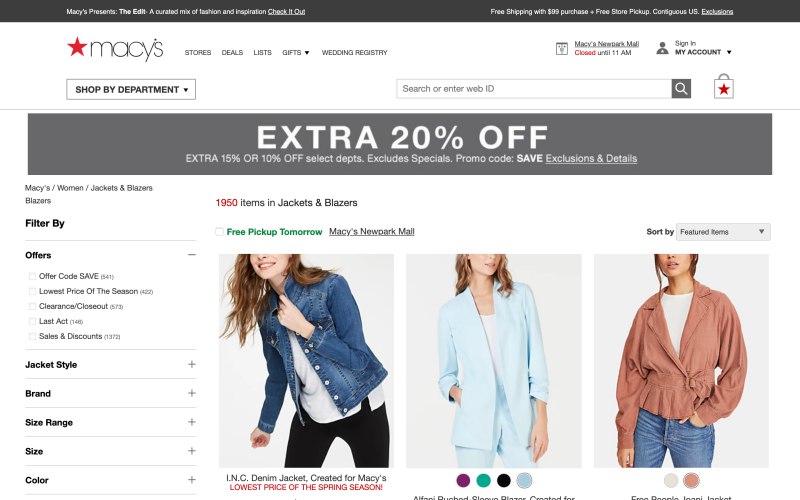 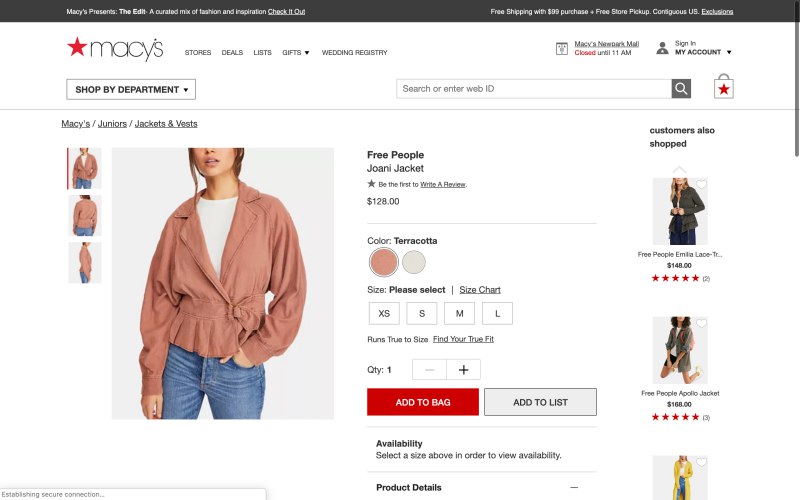 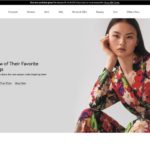 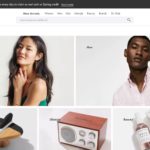