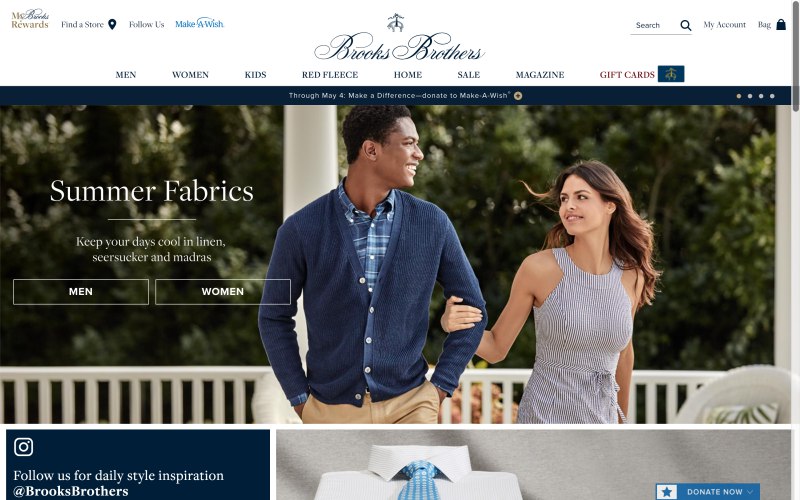 Net-a-Porter
SSENSE
Shopbop
Brooks Brothers 2019 Review
Description
Brooks Brothers is a known fashion clothier and retailer in the United States, which started as a family business and spread out into a worldwide influence through the internet. Their website still has the classic appeal that people loved about them from decades ago, with signature pieces they offer for men, women, kids and even the home.
Products' Positive Reviews
60
Customer Support
20
Range of Products
86
Shipping Options
60
Reader Rating2 Votes
57
Positives
Vast selection of items for women, men, kids, and home
Their website has a classic and refined feel to it
They have a long history of dependable and quality fashion
Negatives
Customers noticed the declined in the quality of pieces
Customer support is hard to reach and in the occasions they do answer the phone, they seem to not care about the predicament of the buyers
57
Ratings
Save Big At:
Brooks Brothers

Brooks Brothers prides itself of exuding the same values and fashion quality that they have from two centuries ago, which we feel is the reason why they still retained their customer base for that long. They offer a huge selection of pieces for the entire family, ranging from shirts, dresses, sleepwear, jackets, blazers, suits, pants, bags, luggages, accessories, as well as pieces for the home. The contents of their website are categorized accordingly, to make it easier for customers to browse through items and add items to their cart. This shows the ability of the brand and store to adjust to the modernization of the fashion industry, allowing them to connect to their younger generation of buyers. However, some of their fans noted that the quality of their pieces is far from what they produced long ago and whenever they call customer support to sort it out, they either get no answer or an unhelpful response.

Save at Brooks Brothers

How to use Brooks Brothers Promo Codes

Gone are the days where we need to take some time off our busy schedule to walk down the streets on the way to fashion boutiques only to buy a single shirt. With online stores that pop out of nowhere, quite literally these days, if you’re not shopping online, are you even shopping at all? Some gentlemen out there may say there aren’t that many stores that cater to men. We tell you, perhaps you just aren’t looking hard enough. Come with us as we set sail into a vast sea of menswear offerings on the world web and delve into no less than the oldest menswear purveyor in the United States of America—Brooks Brothers.

Back in 1818, along the streets of Manhattan, Henry Sands Brooks founded H. & D. H. Brooks & Co. Fifteen years later, his four sons inherited the company and renamed it Brooks Brothers, the name that has evolved bigger than what it probably was intended to be as decades passed. This classic traditional brand redefined menswear aesthetic in America as it was the first to introduce ready-to-wear suits in the country. In its early history, Brooks Brothers tailored Abraham Lincoln’s coat, and since then, the former US president became one of their loyal customers. Apart from Abraham Lincoln, Brooks Brothers holds the distinction of outfitting 40 out of 45 presidents of the United States, to include Theodore Roosevelt, John F. Kennedy, George Bush, Bill Clinton, and Barack Obama. The company has also manufactured a variety of clothing, including soldiers’ uniforms, New York volunteers’ uniforms, and even clothes made specifically for slaves to wear.

Brooks Brothers has become an institution in the American menswear industry with its introduction of essential elements of classic American menswear. The company introduced a number of vital pieces in American fashion—from sack suits and summer suits to button-down shirts and shetland sweaters, down to madras, Foulard ties, and argyle socks. With these clothing innovations, safe to say Brooks Brothers has influenced classic fashion and style in America throughout its history as the leading manufacturer of menswear in the country.

Today, Brooks Brothers operates in more than 300 physical stores in America and has 70 outlet stores in other countries such as the United Kingdom, France, Canada, Spain, and even reaching out to Asian countries like Japan, China, and Singapore, to name a few. It has also extended its presence digitally through brooksbrothers.com and offers all of its products virtually.

From black to red and gold

Brooks Brothers has made a name for itself in the world of classic tailored men’s suits and, since then, it has continued to expand its alluring offerings by adding more casual clothing along with footwear for men and a line of clothing and footwear for women.

In 2007, Brooks Brothers launched Black Fleece, a collection of designer Thom Browne’s bold take on the Brooks’ classic and signature high-end clothing pieces. The line was initially planned to be a three-year project only, but its popularity among fine gentlemen increased, making the collection last for an astounding eight years. In 2015, Brooks Brothers discontinued the collection when Browne decided to focus more on his own clothing line.

Brooks Brothers now has Red and Golden Fleece as a part of its long-established marketing strategy. The Red Fleece collection is Brooks’ modern take on preppy looks while the Golden Fleece is a line of modish yet casual clothing and footwear for men. From the Red Fleece collection, women can choose between tropical print off-shoulder tops and Foulard-print crepe shirt dress for a laid-back look ready for spring. The Golden Fleece line, on the other hand, offers slim-fit striped dress shirt with button-down collar that is best paired with chino trousers and cap-toe shoes for a modern gentleman’s everyday look. Brooks Brothers’ 200-year heritage of innovation in fashion and style, excellent quality, and exceptional customer service has brought itself from being a humble store in Manhattan to its global position today as the leading purveyor of men’s clothing. With all the biggest names in fashion, you’ll be guaranteed to find only the best high-end men’s clothing around online, or in-store, at Brooks Brothers. Dress up to the nines with Brooks Brothers, and you’ll surely turn everyone’s head around. 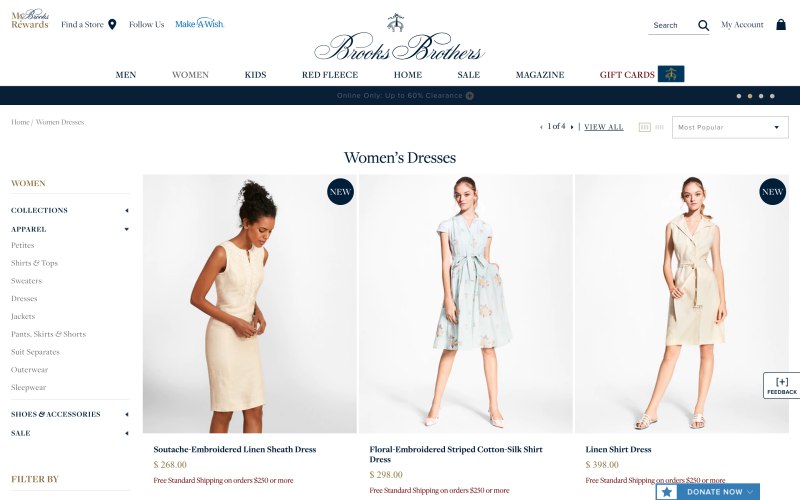 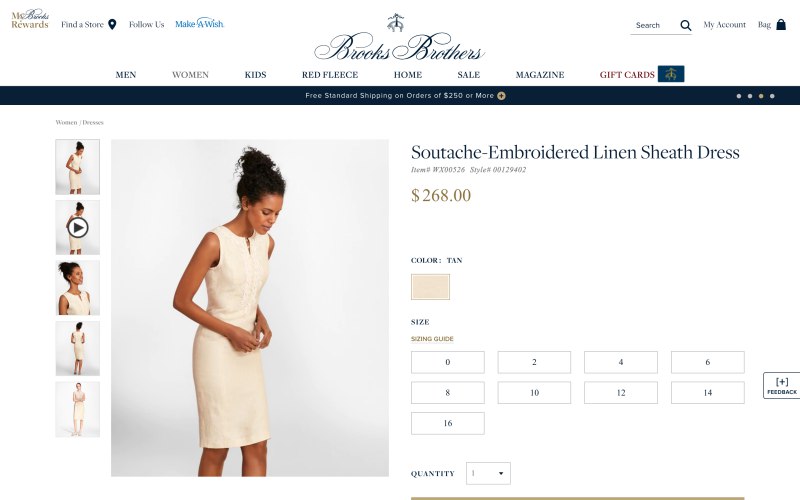 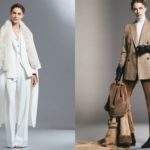 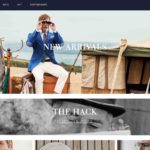