Love for Karl Lagerfeld was overflowing during Chanel’s most recent runway show. The house did not miss the opportunity to make the Kaiser’s spirit alive during the presentation of his last collection for Chanel, as it was filled with references to the designer’s life. Both the runway and the audience were present with celebrities who were touched by him during his lifetime—Spanish actress Penélope Cruz was just one among them, and it was a sight that is worthy of a headline because it was the first runway walk for the Oscar winner.

Cruz, who became an ambassador for the brand last year, shared a long friendship with Lagerfeld. When news of the designer’s passing hit media outlets, Cruz was among the many who have expressed her condolences through Instagram. She spoke of his kindness and the many laughs that were shared between them. In the past, the actress has been open about admiring Lagerfeld ever since she was younger and continuing to be a follower even after she first attended a Chanel show in 1999.

Cruz was immaculate on the runway, walking out in an all-white number save for the black ribbon that kept her hair in place. It was completed by a white rose she held in her hand, which did not look unusual in the winter-themed Chanel catwalk. For Lagerfeld’s final collection for the French heritage brand, Grand Palais was covered in snow. It is said to have been inspired by memories of the designer’s childhood in Germany, especially that of a ski town, as revealed by photographer Ellen Von Unwerth to The Hollywood Reporter.

The collection and the transformed venue were not the only things present to remind attendees of Lagerfeld. The show also had a recording of the designer in which he recalled how he became the house’s creative director in the 1980s. By the end, when longtime Karl collaborator and now successor Virginie Viard took her bow, she did so while David Bowie’s song Heroes was blasting. Bowie is known to be an artist Lagerfeld loved, and the song was also played during the catwalk show in Milan for Fendi, another house that Lagerfeld led.

Guests and models alike had a hard time keeping it together at what turned out to be an emotional show. Cruz herself was carried away by the celebration of Lagerfeld’s career through his last Chanel collection, sharing with Women’s Wear Daily that she “was smiling and crying … all these people celebrating him together and, at the same time, the beginning of something else.” The award-winning actress shared the runway with fellow Karl favorites, such as Cara Delevingne and Kaia Gerber. Other celebrities who had the opportunity of witnessing the Renaissance Man’s genius when he was alive such as Kristen Stewart, Stella Tennant, Naomi Campbell, Janelle Monàe and Claudia Schiffer were also present to pay their respects to the prolific designer. 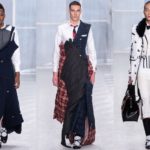