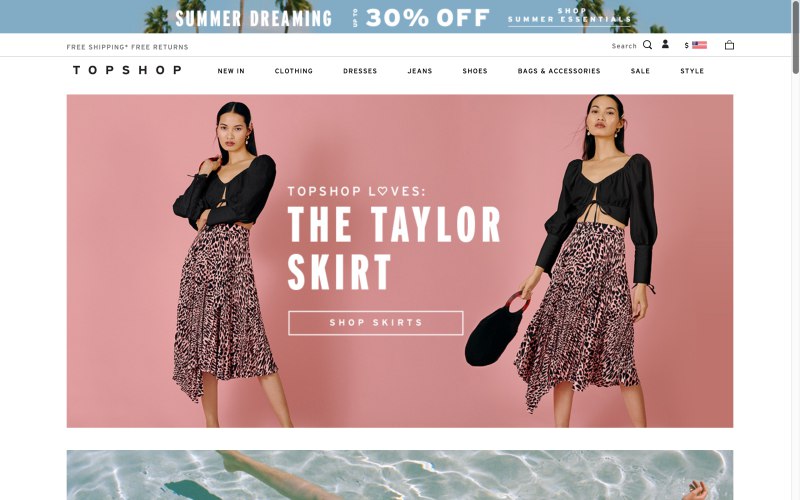 Net-a-Porter
SSENSE
Shopbop
Topshop 2019 Review
Description
Topshop is one of the go-to fashion destination both online and offline for trendy women looking for some of the best hip and chic pieces of the season. The online website of the shop has everything a fashion-hungry woman wants: dresses, jeans, lingerie, skirts, shorts, bags, wallets, and all styling pieces one could ever ask for. With the wide selection of items the online store offer, every shopper doesn’t need to switch to another website to find more.
Products' Positive Reviews
Customer Service and Support
Range of Products
Shipping Options
Reader Rating1 Vote
Positives
Hip and on-trend selections
Free delivery within the US and option for express delivery
Free return policy
Negatives
Offers pieces for women only
Customers have been disappointed because of orders that weren’t received as well as the terrible customer support of the website
2.5
Ratings
Visit:
Topshop

The British fashion retail shop, Topshop, has around 500 physical stores worldwide already, yet their website is able to reach more of its clientele. The website carries amazing collection from different brands, some of which are exclusive capsule collections that are only seen on the website. The number of pieces in their selection continues to grow, as Topshop continues to partner with many different brands to give their shoppers the best options when it comes to up-to-date fashion. The website also offers express shipping for an added price, while for those ordering within the United States, shipping is offered for free. But while there the amazing responses about the quality of their selections, there are also many very disappointed customers because of Topshop’s bad customer service. There were items that weren’t shipped to the buyers at all, while those who wanted to try the return policy of the website found that it wasn’t as easy as they had hoped.

How to use Topshop Promo Codes From the catwalks of London to the glitzy roads of Los Angeles, Topshop has proven to young women all over the world that they can be as fashionable as their British fashion inspirations. It has a long history of making stylish ensembles out of its fans, and not missing out on trends. Their collection is made out of affordable but high quality apparel so that every dollar spent will be worth it. When buying Topshop, you gain fashion cred not only from young, emerging designers but also from international celebrities.

The now familiar name was an offshoot of a UK department store called Peter Robinson which exclusively sold high fashion British merchandise during the Swinging Sixties. In 1964, Topshop became among its divisions, founded with the same intent of selling British items but to a younger clientele. Some of the youngster brands it stocked include Mary Quant, Jeff Banks, Radley Cooper and Gerald McCann. Eventually, it also added to its collection fresh designs from Stirling Cooper, founded by Ronnie Stirling and Jeff Cooper, with Jane Whiteside chiefly making the label’s designs.

Topshop was such a success that it prompted Arcadia Group, the multinational retailing company that owned both Peter Robinson and Topshop, to build a standalone store for the younger division. It was agreed that the former will focus on its customers aged over 25, while Topshop will market for those below. Business exceeded expectations for Topshop, faring even better than Peter Robinson, that other retailers such as Miss Selfridge and Harrod’s, and the Way began seriously treating it as a rival. Due to Topshop’s success, its men’s clothing counterpart, Topman, was conceptualized a few years later.

Since then, the British brand has expanded beyond London, with a store in Amsterdam, and then across the pond in the 2000s. Topshop and Topman merchandise were already available previously in the United States through big department stores such as Barneys and Nordstrom, but the launching of its own stores in New York, Chicago and Las Vegas legitimized their presence in the US. The Las Vegas store alone boasts of 20,000 square feet of high end fashion.

Although the company is still very British, the expansion to the United States caught the attention of the US-based private equity group Leonard Green and Partners, which bought a quarter of Topshop and Topman’s ownership. Such move caused the streamlining of Topshop’s expansion in the US.

Since the beginning, Topshop’s clientele has been younger, fashion-savvy women. But the expansion to different places beyond the UK has also widened the outlines of its target market: young women, aged 15-30, who want to dress like their chic British counterparts.

Its offerings come in all forms—apparel, shoes, accessories, bags as well as cosmetics—so that the fashionista would not have to go elsewhere for their specific fixes. Through the years, being fashionable has meant differently for women. Topshop also grew and developed according to the tastes of the times, which in the recent past became revisiting the 80s, circular bags, pearls, shaped heels and dainty, floral dresses, just to name a few.

The brand is preferred for its affordable pieces, compared to other big names offering modern street and casual wear for a higher price. They are especially ideal for students who are given a 10% discount for their purchases. However, even without the discount, regular customers already get more bang for the buck with Topshop, because of its ability to capture current trends. With recent changes in the industry, its merchandise have become eco-friendly and increased in quality, too, making every purchase worth it.

Get ready and grab the goodies

For the trendy lady, Topshop should be kept in mind, or in the case of its online shop, bookmarked. The former is not a problem, with the British store having 500 shops around the world. Although a considerable chunk of that size is in the United Kingdom, at least 200 of these are distributed worldwide.

Topshop is also accessible through multiple channels, which means you can afford to be in tip-top shape (fashion-wise) in your own terms. If you opt for the online version, Topshop has international shipping for most countries and are constantly adding more destinations to cater to more fashionable women. You can have a purchase picked up at Topshop’s stores or have the items directly delivered to your home. For UK-based customers, any item that you are unhappy with can be returned within 30 days after receipt, provided that the clothing is in good enough condition to be re-sold.

From time to time we see Topshop partner with designers and other celebrities to keep the selection fresh. Such trendiness and effective marketing earned its capsule collections significant media attention, gaining popularity and selling fast anywhere in the world.

English supermodel Kate Moss’ first collaboration as a designer was with Topshop. Back in 2007, she designed clothing that were inspired by her personal wardrobe. Among the most applauded was Moss’ hand-beaded cocktail dress that featured 60,000 Swarovski crystal beads. Seven years later, the British style icon made a comeback with a collection full of vintage-inspired clothing.

Another milestone partnership for Topshop was with American singer and performer Beyoncé in 2014. This collaboration resulted to the launching of a highly anticipated activewear brand, which later on was called Ivy Park. The work took approximately 18 months, which successfully introduced to the world the Queen B-approved apparel and accessories.

Being a UK brand, Topshop is more than eager to showcase to the world British design. It has previously sought out working with other British brands such as Red or Dead, Whistles, Tristan Webber, and Stella Vine. These collaborations are of mutual benefit for both parties, especially young and budding designers. The latter can get a platform that could serve as their jumping board, while Topshop can capture the soul of today’s hip and young crowd, season after season. 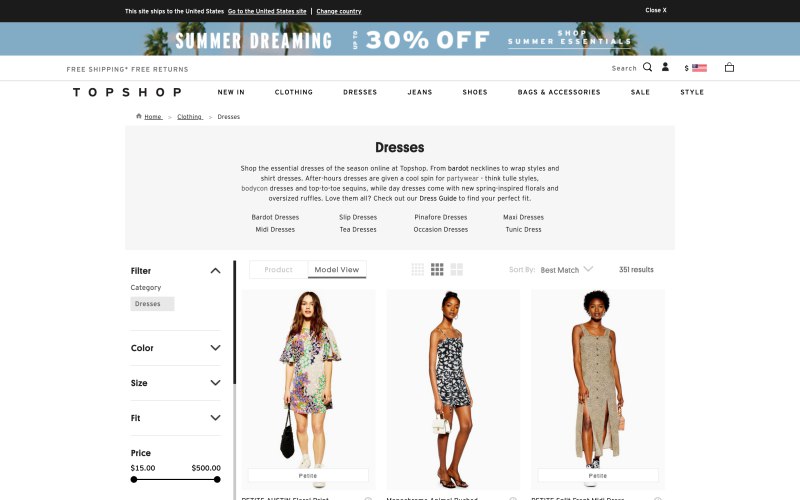 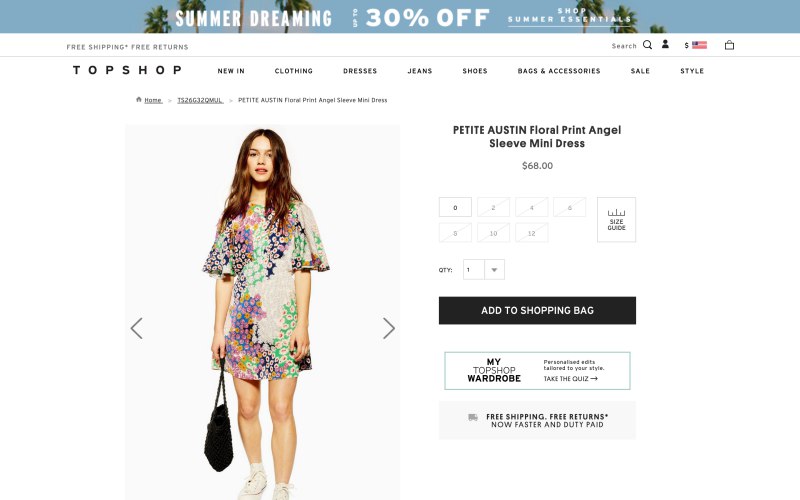 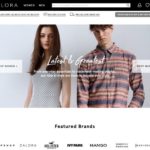 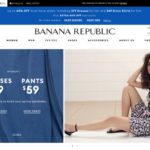