“The Women” is a cult classic film released back in 1939 that is considered as the quintessential fashion movie from the Golden Age of Hollywood. And while this wasn’t the exactly what directly inspired Giorgio Armani’s latest Spring 2019 Haute Couture collection for Armani Privé, one couldn’t deny the film’s influence on the clothes. Unlike previous years, there wasn’t a singular theme that defined the entire collection. This was an eclectic offering that showcased Mr. Armani’s indelible legacy of razor-sharp tailoring and couture-caliber evening wear. Even the color palette, which at times became rather strange and arguably garish, didn’t drown-out the mastery of Armani and his atelier’s works. Each suit, whether with pants or a skirt, so precisely fit the models that they looked as if they were constructed right on their respective bodies. The evening dresses, on the other hand, with all their feathery and lacey splendor, provided the softness and lightness that perfectly juxtaposed the more rigid looks in the beginning. Whichever a client chooses to dress for—be it a business meeting or an evening gala—rest assured she’ll find a piece that’s perfect for her in this collection. 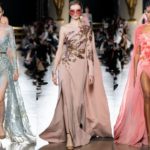