Air Jordan 6 Retro “Sport Blue” Review
Description
The Air Jordan 6 Retro "Sport Blue" can be summarized in three S’s: simple, sweet and sleek. Blue and white are dependable options, and the Air Jordan 6 is a sick silhouette that really plays with the colors well. The restocks are favorable for those who are still looking to cop them, and they remain stylish and versatile even in the years that have followed since the Air Jordan 6 Sport Blue has been retroed.
Comfort
Design
Value for Money
Reader Rating1 Vote
Positives
Negatives
4
Ratings
Available at:
Ebay - From US$92.18Goat - From US$105.00Amazon - From US$149.04Flight Club - US$275.00

The year 2014 is a good year for Air Jordan 6s. First championed by MJ in 1991, the silhouette was created with a sports car and a pit stop in mind. Twenty-three years later, the Jordan Brand has released many new and retroed styles, with the Sport Blue among the most anticipated, and honestly it’s not hard to see why. The appeal is universal, and blue and white are picks that seem to work with almost anything.

Before 2014, the Sport Blue has remained in the archives since its inception in the 1990s. Following the announcement that it will see a revival in the 2010s, sneakerheads were driven to keep an eagle eye on the release date. The colorway has actually graced other Air Jordans, but the sixes are arguably the most respected. True to the name, the Sport Blue works with the AJ6 silhouette by predominantly using white leather and leaving hints of blue to create cool, sporty kicks.

The shoes live up to the hype, especially if you want them to be sick without that much pizzazz; the white with pops of blue is pretty straightforward as far as colorways go. These had received much attention too considering that it is the first time since the 1990s that Nike took them out the vault, and for the most part, the Retros look very much like the OGs. The former are sporty and clean, the combination of blue and white really elicits a fresh feeling, and the subtle dark finishes give the shoes more character. At US$170, they are reasonably priced, and looking for them shouldn’t be that much a pain because they have been restocked since they first hit the market. The resale value of the shoes would not differ that much from the retail price compared to others that are limited in production.

The fact that Jordan Brand reproduced the Air Jordan 6 Retro Sport Blue a few more times after August 2014 bodes well for those on the hunt for them without the amped up price. Those planning to make more dough out of them through reselling will not make that much of a profit, though. The appearance of the kicks also do not differ significantly when compared to the Infrareds, nor is it that uncommon, so the Sport Blues are not your best bet if you want your feet to be unique. It is generally recommended to go down a size unless you have wide feet so that the shoes would fit perfectly. 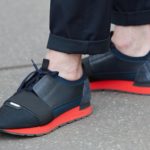